Uganda isn’t a small land. Our base for the next 10 day will be in Soroti, about a 7 hour drive from Kampala to the North, but not even close to the northern boarder. Leaving town took about 2 hours of the trip. Even the hotel is reasonable close to the edge of Kampala it’s quite a drive to really let Kampala behind. Kampala seemed endless! From our chat last night we thought that the road constructions were all done. Far from! We got the chance to test every phase of road construction, really: every phase.

At the road we decided to have a quick stop in Jinja, because we had to see the source of the Nile, the river that crosses the continent for 6605km before reaching the Mediterranean Sea. Others had seen it, and I should have, too. It was just a little D-tour from our way to Soroti. At the park, only Leon and I had to pay for the ticket. Bizarre, but true. And we had to pay for the car to enter the park. 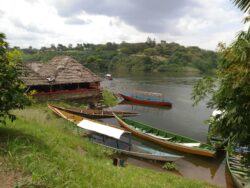 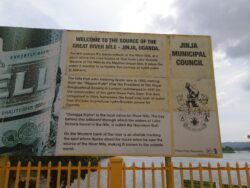 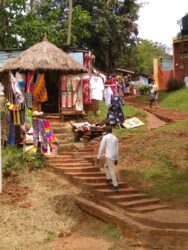 At the parking lot, a guide came to us. Didn’t know we hired one. Seemed, it’s all inclusive, here. After a short explanation about the place we went down the stairs to the water to see the source of the Nile. Apparently, it’s an underground source, measured by the amount of water coming into the valley and the amount leaving the valley for the journey of nearly 3 month to the Mediterranean Sea. Climbing back up the stairs to the car, and off we went to drive to Mbale. In Mbale we should have lunch (lunch in Uganda is usually around half past 2, I learned.) At the Rotary in Mbale, nobody was hungry. Thus, we had a quick look at Mount Eldon. And hit the road, again. 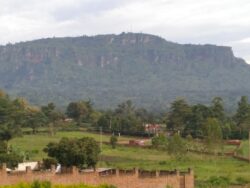 The weather became crazy at the last part of the trip. It went van cloudy to worth. At some point it nearly became dangerous to keep driving, not at least because of the driving of the others at the road and along of it. What a wind, what a rain! The raining season should be over, almost, at this time. But Uganda had a lot of rain this year, much more than usual. Some regions went under, crops were lost, grass huts and other buildings were damaged.

For me, the villages and towns along the road were interesting. The first impression, how Uganda lives, after Kampala. Grass huts, wooden huts, brick buildings, open market, workplaces and shops. A colourful hussle.

At first, I thought I could use our travel time for some reading and some work. Just wrong! Couldn’t stop looking through the window, taking every sight in, try to understand what I see (and also what I do not see). All the green, too familiar. And then, totally not. Most plants I did not know. Swamps I’ve never had seen. Fields, rainforest, rocks (I didn’t expect). And those villages, towns along the road. Busy, peaceful, colourful, dusty, poverty and richness. Nothing obvious, never the same. Order without structure. Or the other way around, depending on how you look at it.
Loved every second of our journey!

We arrived savely in Soroti, anyway. When we arrived the sun came out, again.

First, we went to our AirB(&B). Just to see, where and what it is and to drop our luggage. Wat a great compound to stay, we were very pleased with it. 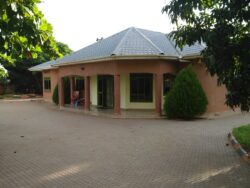 We drove back to town, After all, we had to take care of our own breakfast. And we were hungry for some dinner. The Canunu became our place for lunches and dinners. Good food, good service, good vieuw 🙂 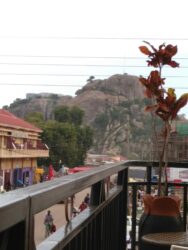 The OM supermarket was easy to sort out; quickly we had everything we needed, except for fresh fruit. That, we bought at the open market.

Reorganising – Back to Kampala