Via Lahemaa towards Tallinn

Some confusion. Thought, we had our night stay in the Lahemaa National Park. Seems we had still a few km to drive over there. Our first stop was at the stone museum at the Finish Bay. Stone museum means, the stones lie in nature, numbered, registered and explained. Didn’t see much more of the park.

Next stop was the heritage of a landlord. Main building, orangery, yards, parks, black smith, mill. Seems, with villages on quite a distance, that types of places organised all they needed by themself. Sitting in the yard, under a apple tree, was just a fine treat! 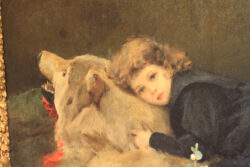 Part of Tallinn started as ‘Reval’, a German settlement of traders, a city with Hansa-status. The historic city center has still medieval charms at some points.
The Rotermanni quarter is a former industrial area, which gets rebuild in modern style, for apartments, offices, shops and entertainment.

Actually, in Tallinn the Baltic Sea is called West sea… logical, taking its position into account.

Before we headed for our appointment with a Estonian Politician, we had our lunch at a historic café. The talk with the politician was quite interesting. Never knew, never followed what happened in Estonia recently. 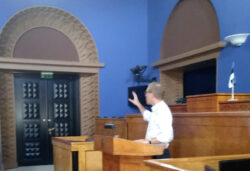 When they got their independence, some young once took the power to reorganising the country. Did it without to much hesitation. One of the reasons, Estonia developed a bit different from the other two. But, yet, basically all three choose different paths. Probably, Lithuania is – in some way – the slowest one in development. Not sure, if that might be a good or bad thing, at last.
The three states agreed on one thing: they need the protection from NATO and EU against Russia. They took their learning points from the Ukraine and all what was happening there.
Later in the talk, neo-liberal voices were recognisable. What a pity!

Interesting are the far-developed digital services, the Estonian government provides. Much more then most other countries are able to.